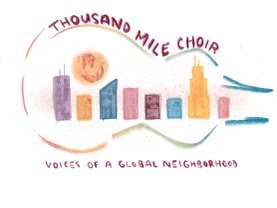 He who sings frightens away his ills.

Jennifer is a musician, teacher and writer with a BA and MA in Vocal Performance. She has sung and taught in the Chicagoland area for the past 15 years, serving as cantor for St. Gregory the Great and directing Saint Gregory Singers, the parish youth choir.

Jennifer works in the refugee community to help support and implement music programs within the Mosaik Community Center and in the Moria, Kara Tepe and Pikpa camps on the island of Lesvos in Greece. She learns far more than she has taught.

Alongside her musical path, Jennifer has detasseled corn, worked through restaurants as a dishwasher, waitress, hostess and line-cook, cleaned as a hotel maid, interrupted dinners as a telemarketer, and ran soccer games as a USSF certified referee.

Jennifer's experiences as a foster child have given her a unique perspective on the search for home and the restorative power of music.  She  believes that access to the arts is absolutely paramount to healing the individual and building the community

Jennifer resides in Chicago with her sports-obsessed husband, her obese cat and her red piano.

Onella is a musician and teacher who holds a MA in Vocal Performance. She currently teaches at the Des Plaines School of Music, the Voice Lab, Chicago and is a Cantor at St Peter Catholic Church in Skokie.

at collaborating with other musicians around the world

to learn about their rich

history which reflects itself into music.

She has volunteered with “Missionaries of the Poor”, an organization based in Kingston, Jamaica. And when living in Sri Lanka, she volunteered to teach music and english at orphanages in Colombo.

Onella grew up in Sri Lankan during the 25 year civil war, before moving to America in 2010. She is no stranger

to the devastation of war

and its traumatic effect on communities. It was during these hard times that she was led to seek refuge in music

and explore the healing

it gave. She aims to keep sharing the gift of music with those around her with the

Hannah is a sophomore at New Trier High School. Art has always been an important part of her life and when she needs to relax, she reaches for a pencil and paper to draw. When Hannah was younger she saw garbage as having potential. She could turn paper scraps into 3-D flowers, or draw her own Halloween costumes from nothing more than old markers. She even made herself a unicorn out of recycled paper. During her summer breaks, she has attended the Art Institute of Chicago to study visual art.

Currently, Hannah is on the New Trier High School yearbook staff. She also studies piano and music theory at Northwestern Music School. She enjoys singing while playing piano and loves

both classical and contemporary music.

Hannah is thrilled to have

been given the opportunity to design the Thousand Mile Choir logo. She is happy to

help nonprofit organizations and is excited to have a chance to use her strengths as a visual artist to help build connections in the community.

Words and music by Jennifer Sherrill